SEND US YOUR PRAYER REQUEST REQUEST A MASS CARD
Navigation 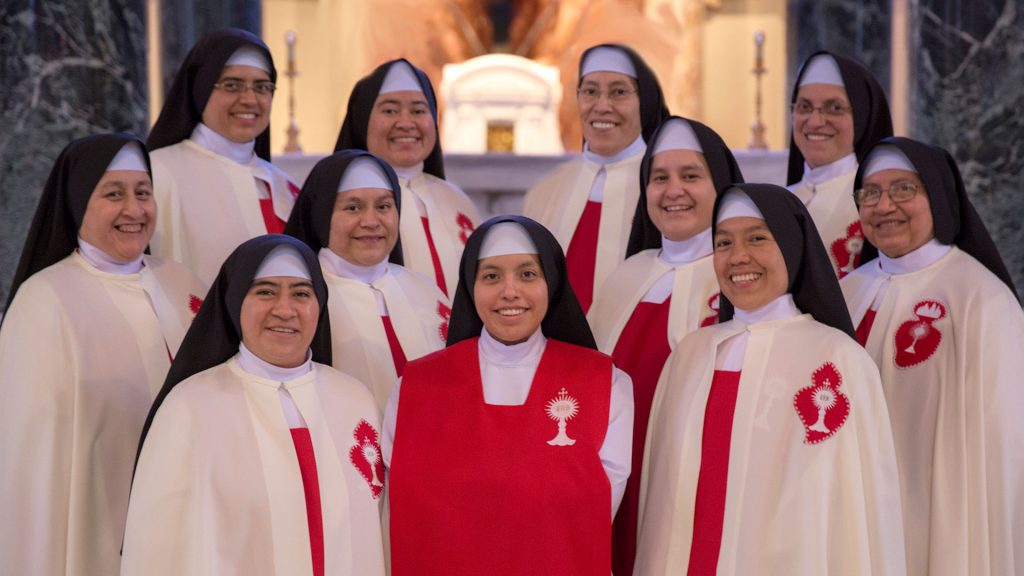 The mission of the Perpetual Adoration Sisters of the Blessed Sacrament is, as their name describes, the adoration to Jesus truly present in the Most Blessed Sacrament. Each Sister has her turn for adoration, day and night, in front of the Blessed Sacrament where they continually pray for the intentions and needs of all humanity, especially those who daily send their prayer requests, and all members of the Diocese of Sioux Falls which is their home. The sisters way of life is contemplative. Living their mission and charism is fulfilled inside the Monastery; leaving it only in order to provide for basic needs or special occasions. While their main charism is prayer, each sister assists in different community activities such as sewing, cooking, sacristy, laundry, host making, receptionist, and office work. Spiritual reading, recreation and study are also important duties in their daily routine. The Order was originally established in Italy by Blessed Mother Mary Magdalene of the Incarnation in 1807. In May of 2002, in response to the invitation of Bishop Robert Carlson, seven Sisters arrived from Coscomatepec Veracruz, Mexico to start a new community in the Diocese of Sioux Falls at the Cathedral of St. Joseph. By following their rule, their mission is accomplished quietly inside the walls of their cloister. Day by day the sisters offer their lives lovingly to God and his people with their humble service of prayer and adoration to Jesus really present in the Most Blessed Sacrament of the Eucharist. 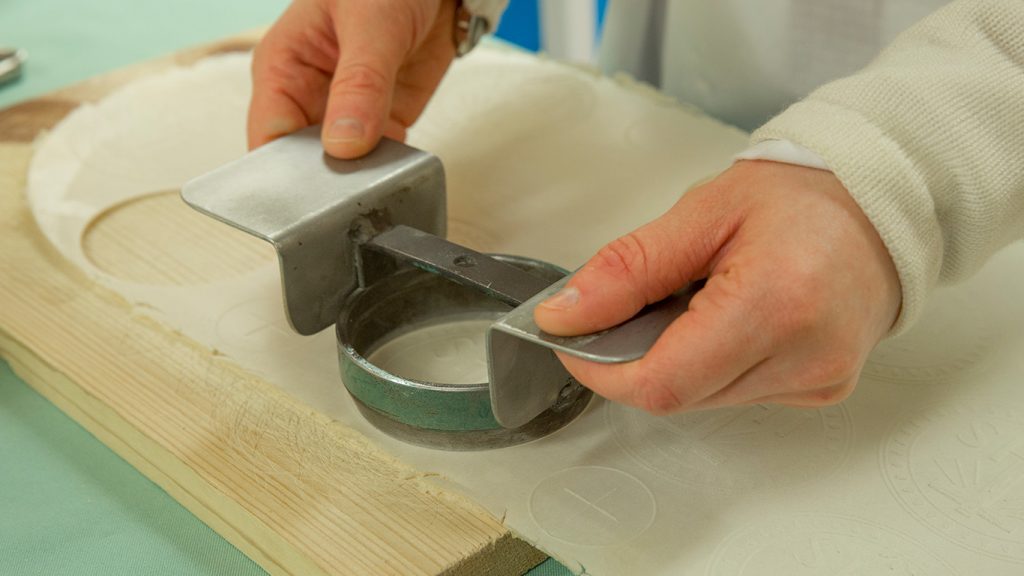 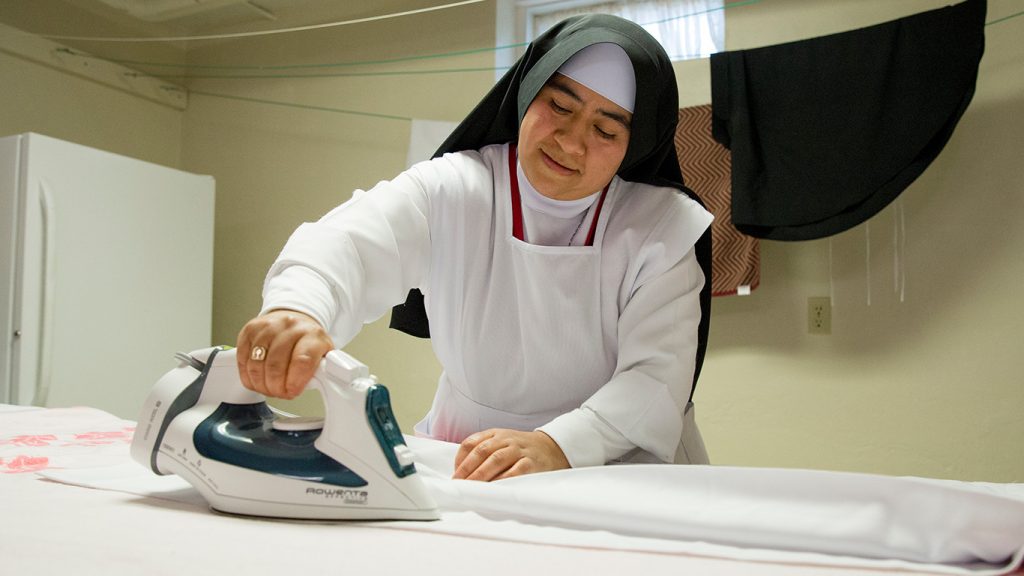 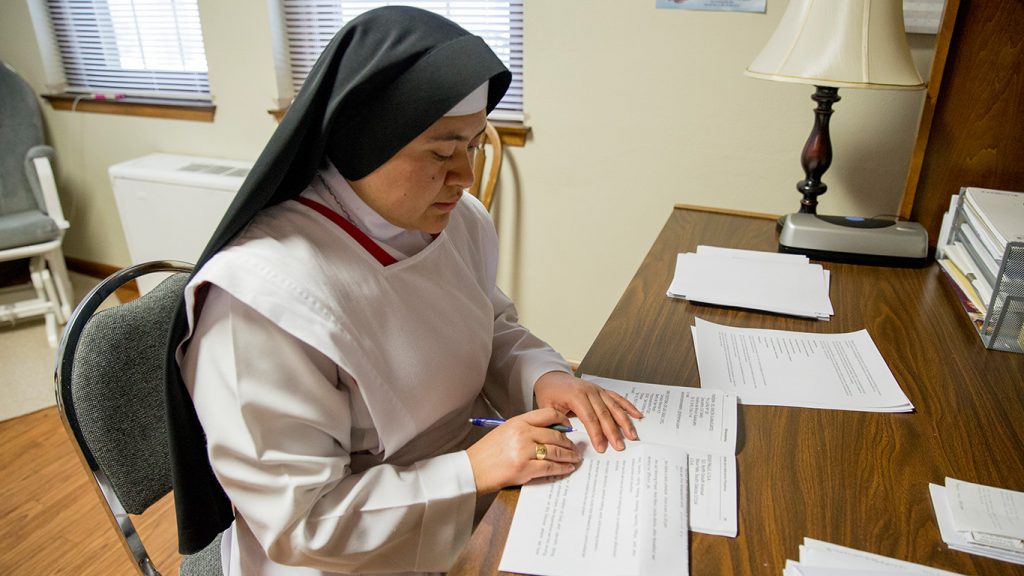 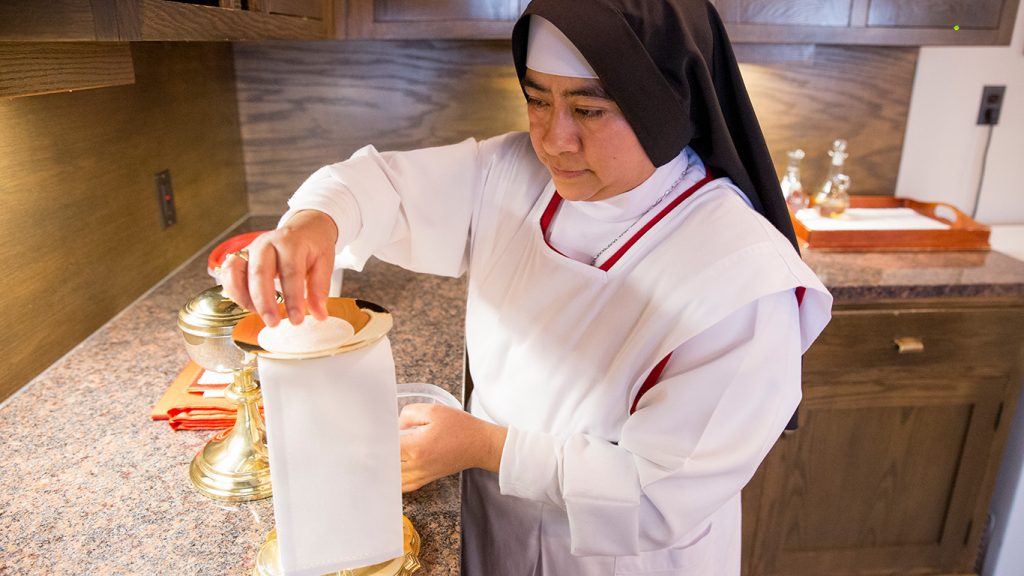 Working in the sacristy 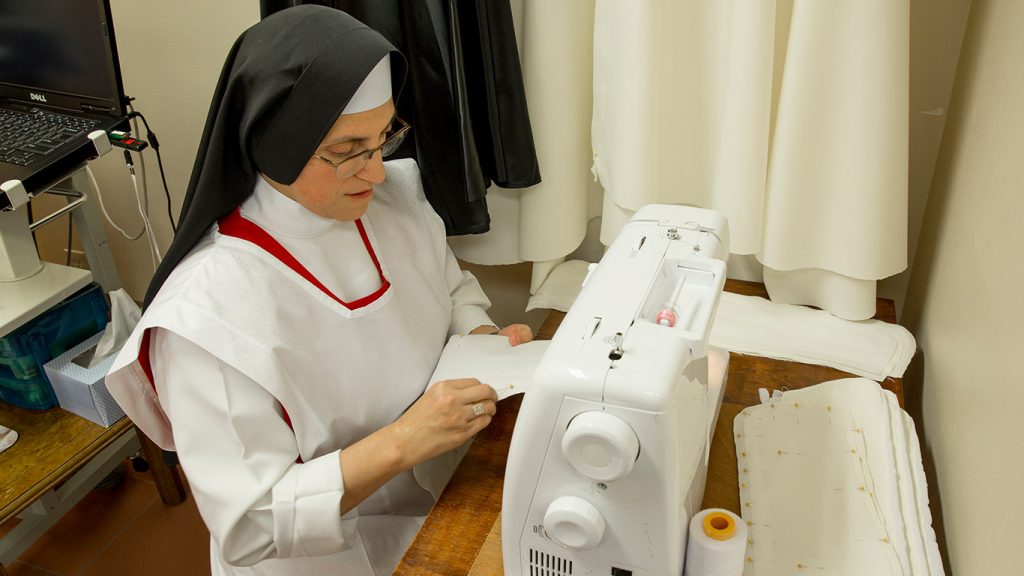 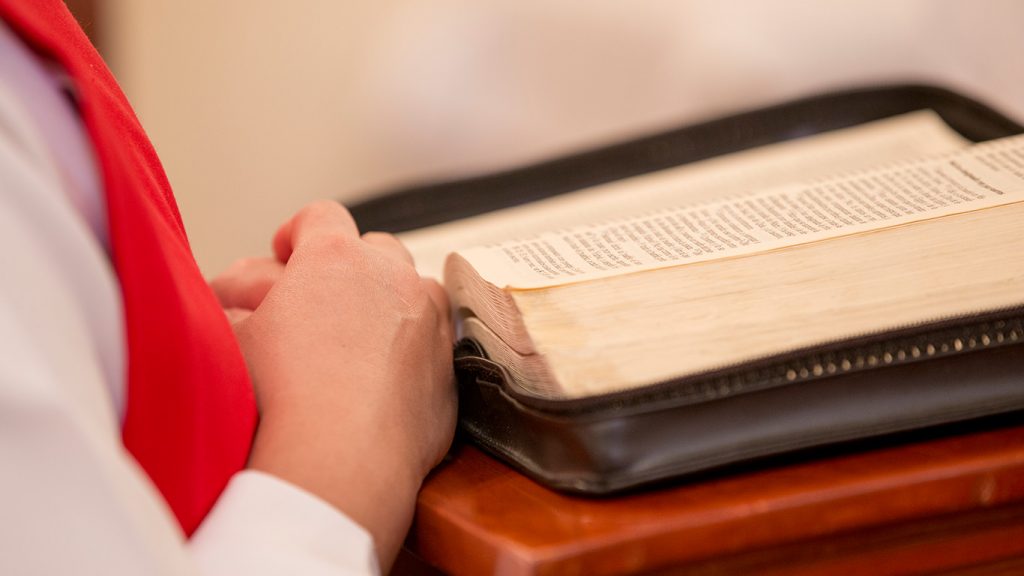 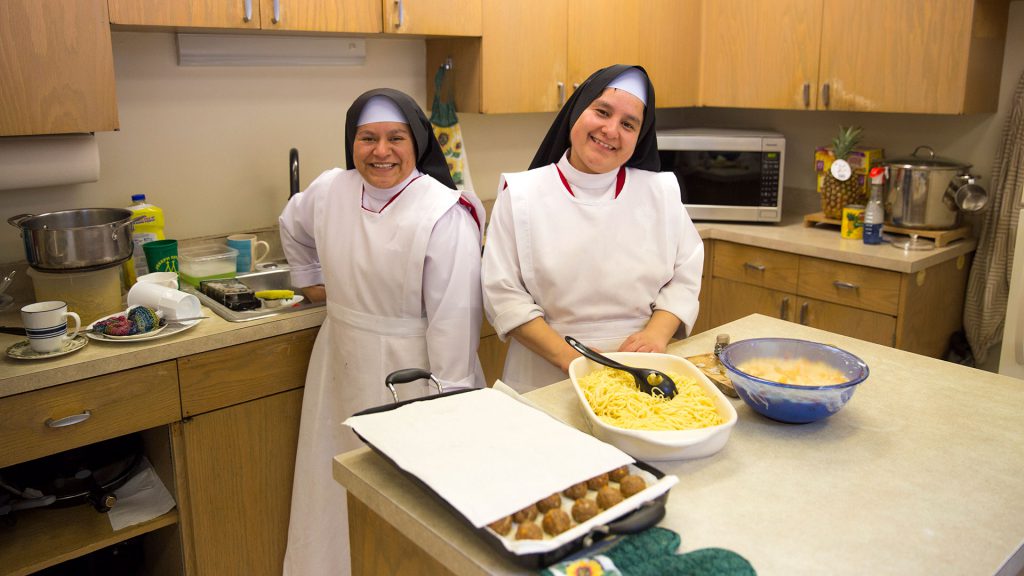 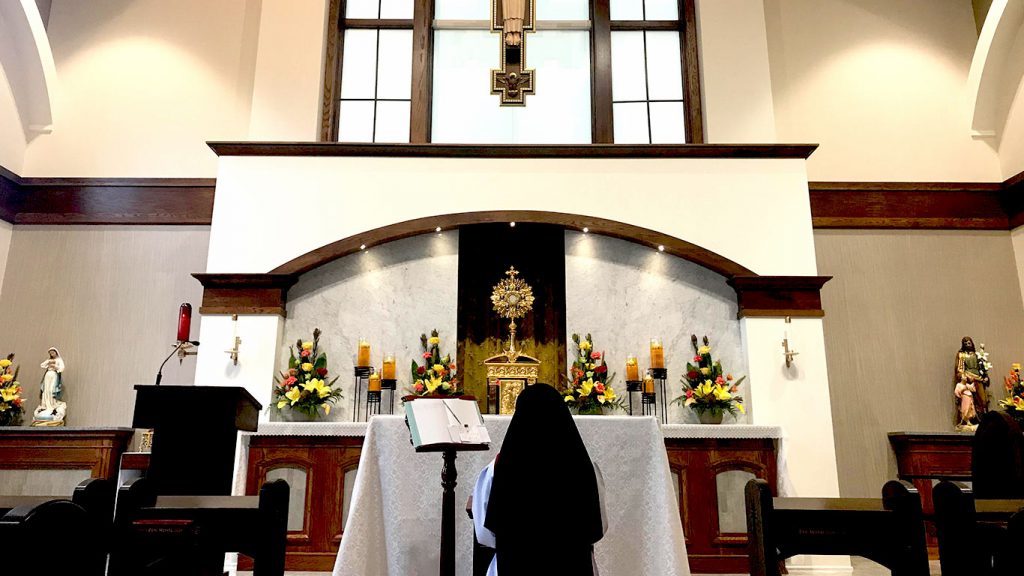 Praying before the Blessed Sacrament

Each Sister has an hour of personal adoration before the Blessed Sacrament daily and during the night one hour two times a week.

Our Monastery in Sioux Falls

At the request of Most Rev. Robert Carlson the founding sisters arrived from the Monastery of San Juan Bautista de Coscomatepec, Veracruz, Mexico in May 2002, to adore the Lord in the Holy Eucharist and to pray for all peoples, especially those in this diocese. In May 2018, the Adoration Sisters’ new home dedicated to intercessory prayer, The Mater Ecclesiae Monastery, opened on the Cathedral of St. Joseph campus. The Sisters’ home for their first 16 years of ministry in the Diocese was the Monastery of Our Lady of Guadalupe and Saint Joseph located in the former Cathedral of St. Joseph rectory. 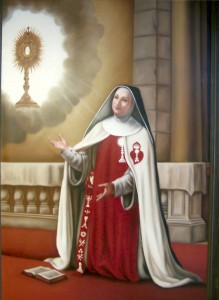 Blessed Mother Magdalene of the Incarnation was born in Italy on April 16, 1770 as Caterina Sordini. She had a lively temperament and after sustaining some injuries in some childish escapades, Caterina began to settle down. She became engaged to a young man in the village, Alfonso Cacece. Before the couple were to get married, Alfonso had to take a trip to Constantinople. It was during this trip that Caterina took the opportunity to dress in her finest and decked with her jewels given by her fiance she went before a mirror. There, her reflection was blurred and faded, and in its place, she saw in her mind’s eye Christ hanging from the cross and irresistible words came inviting her to exclusive love and devotion. This profound experience caused her to faint and when she recovered she was a changed young woman. After consulting with her spiritual director and parents, Caterina joined the Franciscan Tertiaries in lschia di Castro. There she began religious life as Sister Mary Magdalene of the Incarnation. During the novitiate with the Franciscans, Sister Mary Magdalene had another vision. This time she foresaw that she would found an order dedicated to perpetual adoration. Sister went on to make her vows with the Fransiscans. Eventually she became the Mother Abbess. It was in her second term as Abbess that she gained permission to found the Sisters of Perpetual Adoration. After founding a monastery of cloistered sisters, she continued in her life of holiness. Many miracles were attributed to her in her lifetime. She was called home by her Divine Spouse in 1824. Blessed Mother Mary Magdalene was beatified on May 3, 2008. Her body is venerated in Rome.

“Jesus, My Supreme Good, I want the whole world to love you even at the cost of my many hardships and of my life.” (Aspirations of Blessed Mother Mary Magdalene of the Incarnation, Foundress of the Sisters of Perpetual Adoration)

© 2022 Perpetual Adoration Sisters of the Blessed Sacrament. All Rights Reserved.